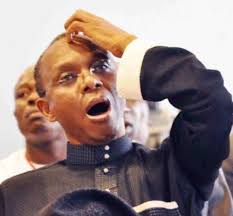 It was another round of bloodletting in crisis-torn Kaduna State as 26 people were killed in the state capital in spite of the total curfew imposed on the metropolis and environs on Sunday.

However, the state governor, Mallam Nasir el-Rufai has claimed that five persons were killed in the violence that engulfed Kaduna metropolis.

In a broadcast on the crisis yesterday, el-Rufai said that his government remained committed to ensuring lasting peace across the state.

The governor cautioned residents against spreading rumour and fake news, which contributed largely to the violence.

He said that in spite of the relative peace across all communities, the 24-hour curfew imposed on Kaduna metropolis and environs will remain in force.

The governor however said that the State Security Council would meet on Tuesday morning to review the security situation and possibly reduce the hours of the curfew.
But the Kaduna State Emergency Management Agency (SEMA) disclosed that 23 people were killed and 17 injured in various parts of Kaduna metropolis during the violence that took place on Sunday.

SEMA executive secretary, Ben Kure, who disclosed this yesterday during an assessment tour of affected areas, commiserate with the victims, just as he noted that no society can progress without peace, which is an essential ingredient of development and harmonious coexistence.

After touring Kaduna metropolis, the SEMA boss also visited Kasuwan Magani, where 55 people were reportedly killed on Thursday, to present relief materials to the affected families.

Kure called on the people of the state to embrace peace and shun violence.
LEADERSHIP recalls that renewed violence broke out in some parts of the metropolis at about 4pm on Sunday resulting in the burning of scores of houses and vehicles, which subsequently led to the imposition of total curfew by the state government to stop the situation from escalating to other parts of the city.

But in another attack yesterday, gunmen said to have posed as members of a vigilante group killed three young men in Narayi area of the city.

The gunmen, who were said to be driving in a Hilux van marked “JTF”, reportedly arrived in the community at about 2am and abducted the young men who were later found dead.
The burial of the victims took place yesterday amidst mass protest by the youths who blocked the major road leading to the community.

It took the efforts of religious and community leaders to pacify the angry youths who accused security personnel “of not doing enough to protect” them despite the curfew.
Speaking in an interview with journalists when the General Officer Commanding (GOC) 1 Division of the Nigerian Army, Maj. Gen Muhammad Mohammed visited the area, a youth leader in the area, Emmanuel Godwin, said the gunmen came when people were sleeping.

“They came at about 2am in a Hilux van and claimed they were vigilante members from Barnawa. We told them that Narayi is not their jurisdiction and they have no business coming to our community since we have our own vigilante group. As they were driving away, they picked three of the boys as if they were arresting them.

“Shortly after they left with the boys, they shot and killed them and dumped the corpses by the roadside,” the youth leader said.

Meanwhile, residents in the metropolis have mobilised vigilante groups to beef up security around their communities from “enemies and invaders” as well as miscreants who may want to exploit the situation.

In Kawo New Extension, Anguwan Dosa, Badarawa, Malali, Anguwan Rimi, Narayi and the Nnamdi Azikiwe Expressway, among other places visited by the GOC, youths armed with knives, machetes, swords and sticks mounted roadblocks on major roads to their communities.

Some of the youths who spoke in an interview said they cannot surrender the security of their communities to security agencies as there were likely to be fake security personnel who may infiltrate and cause harm to them.

…NYSC Suspends Orientation Camp In Kaduna
The management of the National Youth Service Corps (NYSC) has suspended indefinitely all orientation activities for 2018 Batch “C” prospective corps members deployed to Kaduna State earlier slated for today due to the current security situation in the state.

APC May Not Field Candidates In Rivers