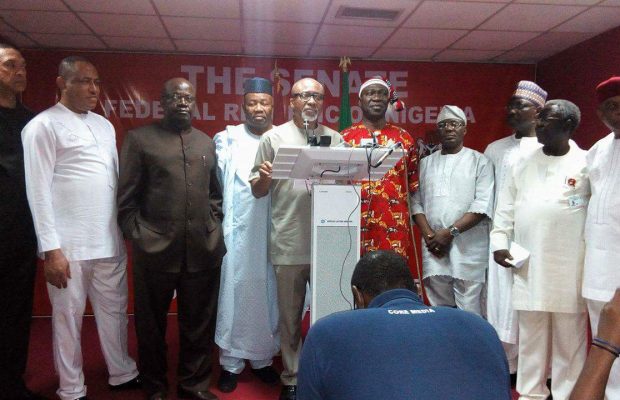 National chairmen of the political parties signed the MoU at the Yar’Adua Centre, Abuja, and pledged to work together under “Coalition for United Democratic Parties (CUPP)’’ to produce a presidential candidate for the 2019 election.

In his remarks, National Chairman of PDP, Mr Uche Secondus, said that Nigerians were waiting for the coalition to rescue the country, and urged the coalition leaders to come together, drop their personal interest and rescue Nigeria.

“We must all agree that today we take our destiny in our hands to rescue Nigeria not only for ourselves but for the generation to come.

“It is important to know that the leaders of our parties fought for democracy during the military. Some of them were jailed, some were detained but they were not weary; they came out strong and they rescued Nigeria.’’

Secondus said that the coalition would rescue Nigeria from intimidation, harassment, breakdown of rule of law and killing across the country.

“Nigerians are waiting for you to vote out APC; we are not afraid, fear has escaped. We are ready to go for detention until the salvation of our country is restored.’’

On his part, National Chairman of R-APC, Alhaji Buba Galadima, said most leaders of the world kept on wondering whether there were men and women of courage, and integrity in this country to face the ruling party.

He described the event as “answer to the outside world and Nigeria’’.

Galadima said that the task of rescuing power from APC was possible if all members of the coalition resolved to work together.

“We will safe this country; we will provide a future for our children and grandchildren.

Galadima said that though the task would not be easy, the coalition would oust APC in the general elections.

National Chairman of SDP, Chief Olu Falae, said that the way the country was at the moment, the political parties could not afford to spill their votes and energy in 2019.

“All our votes must go to the same presidential candidate, governorship candidate, the same senatorial candidate and members of the House of Representatives in each state.

“It is not sufficient to elect a president, because he needs the legislature to succeed,’’
Falae said and stressed the need to make the needed scarifies to rescue Nigeria in 2019.

Chief Peter Ameh of PPA insisted that Nigeria must be rescued in 2019.

In his contribution, Sen. Ben Obi, former Secretary, PDP National Caretaker Committee, said that the essence of the coalition was to rescue power from the APC in 2019 “to save Nigeria from further collapse.”

Obi said it was also to form a coalition that would usher in a unity government and put end to nepotism as well as the current trend of lack of harmonious relationship between the legislature and the executive.

Senate Urges FG To Raise Revenue Base To Check Unemployment