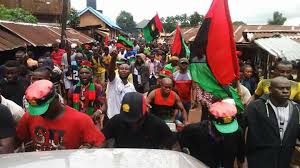 A video has surfaced online of officers of the Nigerian Army torturing men believed to be members of the Indigenous People of Biafra (IPOB) in Aba, Abia state.

In the three-minute clip, a flag of Biafra could be seen on the ground in front of the men who laid face down.

They were eventually flogged and forced to drink and sleep inside dirty water.

This happens amid the three-day curfew enforced by Governor Okezie Ikpeazu in the commercial city.

The state government said the curfew starts from 6pm to 6am on Tuesday and ends on Thursday. However, latest reports say it has been extended till Friday.

The tension is not unconnected to the current face-off between IPOB members and men of the Nigerian Army.